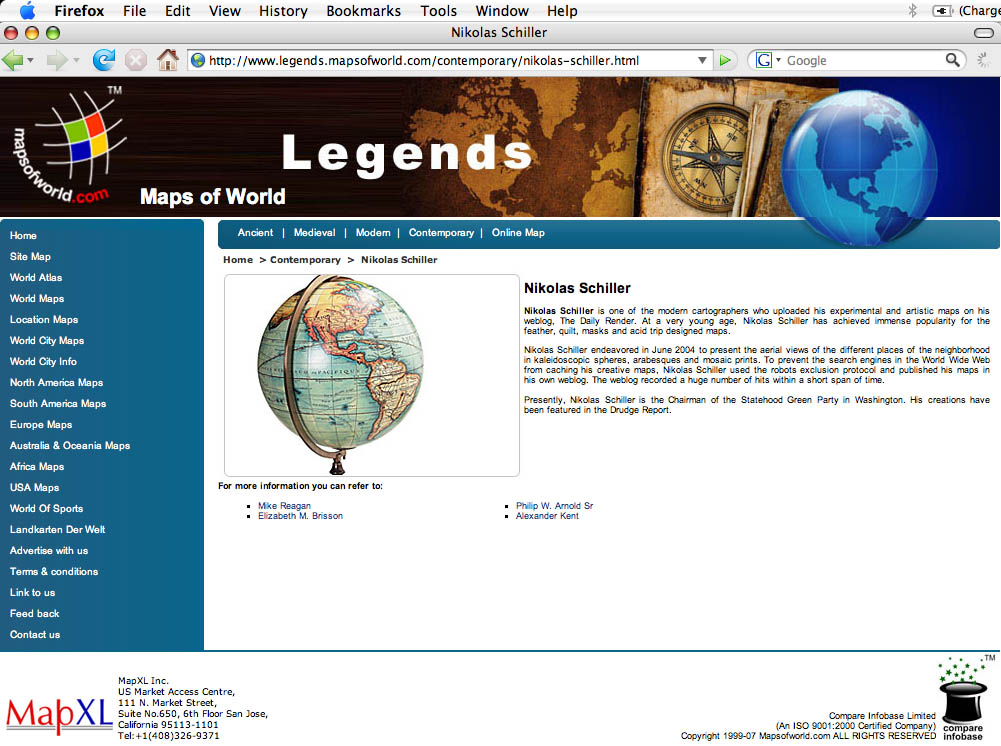 By reading this article and using the Wikipedia listing of cartographers, this company decided to include me on their website. What is interesting is that they don’t sell my maps or link to my website. Worse is that the bio is poorly written and their maps look like they were made ten years ago. Their red/green/blue/yellow coloring reminds me of an old ESRI logo that I have on one of my old bags (not to mention Google’s colors). I am going to be contacting the company to see if I can buy one of my maps from them. {grin}

The text below briefly describes who was listed on Wikipedia last summer:

The contemporary map makers of the world have used their extensive knowledge in the art and graphics to design the maps. The map makers of the 21st century have also incorporated innovations in the schematic map projections.

Nikolas Schiller is one of the accomplished cartographers of the world. The map maker presents the aerial views of the different places of the neighborhood in kaleidoscopic spheres, arabesques and mosaics prints. His prints are published in his own web log. The quilt, feather, acid trip and masks designed maps of Nikolas Schiller are well known around the world.

Mike Reagan uses his knowledge of fine arts in the maps. The reputed cartographer from the United States of America has worked with various popular magazines and newspapers.

The cartographer Alexander Kent has conducted an extensive study on the identity, style and aesthetics of the cartographic language of European State Topographic Maps.

Elizabeth M. Brisson and Philip W. Arnold Sr are some of the other contemporary map makers who have contributed immensely to the field of cartography.

The text from the screen grab above:

Nikolas Schiller is one of the modern cartographers who uploaded his experimental and artistic maps on his weblog, The Daily Render. At a very young age, Nikolas Schiller has achieved immense popularity for the feather, quilt, masks and acid trip designed maps.

Nikolas Schiller endeavored in June 2004 to present the aerial views of the different places of the neighborhood in kaleidoscopic spheres, arabesques and mosaic prints. To prevent the search engines in the World Wide Web from caching his creative maps, Nikolas Schiller used the robots exclusion protocol and published his maps in his own weblog. The weblog recorded a huge number of hits within a short span of time.

Presently, Nikolas Schiller is the Chairman of the Statehood Green Party in Washington. His creations have been featured in the Drudge Report.