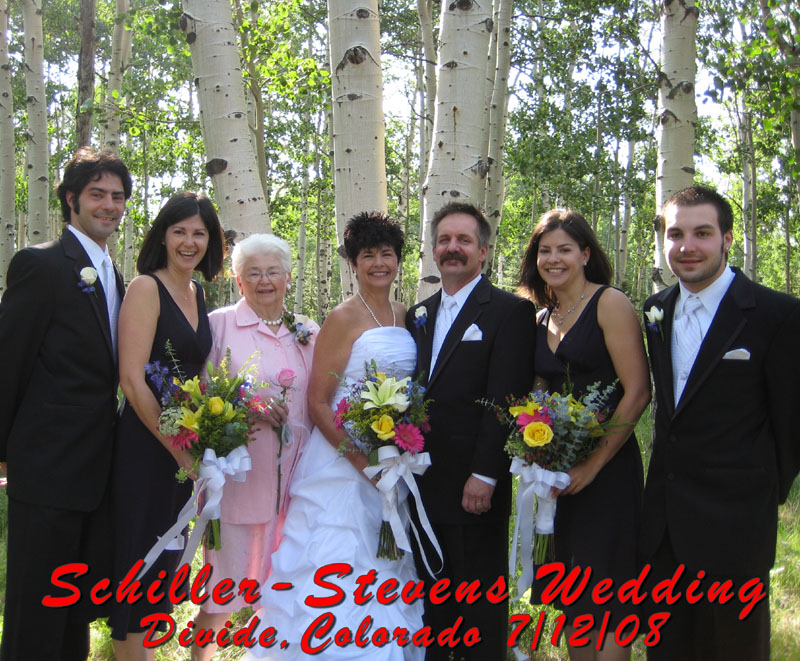 A photograph of the Schiller-Stevens wedding party

Thanks to this, this, this, and even this, I’ve had over 2000 visitors to this website in the last 24 hours. When I contacted Sommer at DCist about the entry, I wasn’t expecting this kind of feedback, but I guess it it’s all relative.

Via DCist, blogger Nikolas Schiller says he stood up for himself and fought back when some kids pretending to have a gun told him to empty his pockets on his doorstep. They beat him up but he kept his stuff. So â€¦ Nikolas, what exactly was in your pockets to make you take such a stupid risk?

Angela, I had a pocket full of memories that could never have been replaced (see photograph above). And to clarify, it wasn’t a bunch of kids who assaulted me, rather they were young adults old enough to drive a car and old enough to know the difference between right and wrong. Frankly, I always thought I get assaulted by a group of 8th graders first, but I digress.

But truly, it was my mother’s wedding photographs that meant the most to me. Having my extended family (only my immediate family is featured above) who live in 7 different states across the country (California, Colorado, Florida, Iowa, Missouri, Michigan, and DC) in one location is something that will never happen again. I waited 13 years for my mom to finally marry my step-father and to let 30 seconds of altercation ruin those memories would have hurt more than the punches to my face.

I think the point of your question was why do something foolish like fight back? Well, a scooter can be replaced and even the camera could be replaced, but the memory card would have been gone forever. Maybe you don’t value your memories as much as I, but that is merely a difference of opinion.

Maybe this extra bit of info would make the story hit closer to the City Paper office: one of my roommates used to work with you. It could have been him instead of me….

But it begs the sincere question of whether people should fight back or give up their personal belongings. I made a choice that could have ended my life, but I lived. Had they been armed, you might have read about it in the obituary instead of my blog. But they weren’t armed and I was lucky to only end up with only a bloody fat lip.

Having been atop the summit of a 13,000 foot mountain on the continental divide and being nearly blown off by gust of wind and falling 1,500 feet to my death teaches one about being fearless in life. Being stopped in your tracks when a thousand pound grizzly bear walks by can make you realize that life can be very precarious as well as dangerous. Being assaulted on your doorstep is downright scary and while I’ve ran through the scenario numerous times in my head, I don’t think I would have changed my decision to fight for what was mine.

I only hope it doesn’t happen again.