Washingtonians have been urging a constitutional amendment which shall give them the status of citizens of a State, for the purpose only of representation in Congress and the Electoral College. They now urge only amendment which, as an irreducible minimum of justice, shall empower Congress in its discretion to give them this status.

War is upon us. World issues and vital national questions absorb attention.

Is this a time to redress the Capital’s political grievances?

Yes, says Washington. To Americanize the political aliens of the District of Columbia is to do justice and to relieve the nation of reproach and shame- achievements which, like the motion to adjourn, are always in order. And not only in a general but in a special sense is this Americanizing process peculiarity opportune, in that it reflects the very thought and spirit of the times and is an integral part of the legislation which springs naturally from the patriotic toward true preparedness.

I do not emphasize the unique patriotic service which Washingtonians have rendered, far surpassing in this respect all other Americans, in the creation, maintenance and upbuilding of the National Capital. I compare them with other Americans solely on the basis of the degree in which they and others have respectively met the general patriotic obligation that is common to all.

Washingtonians have paid their proportion of every national tax, direct or indirect, from the birth of the nation. The only national taxes that fall directly and in ascertainable amounts upon Americans are the internal revenue taxes, including the excise and income taxes. In total contribution in 1914 to these taxes Washington exceeds twenty-two of the States, though it exceeds in population only six of them. Its contribution is greater than those of nine of the States combined. The Washingtonians’ per capita contributions to these national taxes are greater than that of the citizens of thirty-six of the States.

Washingtonians have risked life and shed their blood in every national war. To preserve the Union the volunteers came from the Capital, and Washingtonians supplied a greater percentage of troops in excess of their quota than nearly every State in the Union. In the war with Spain they sent to Cuba a fine regiment exceeding their quota in numbers. The same response was made when the summons to the Mexican border came. At that time the percentage of men of military age enrolled in the organized militia was greater in the District than in any State of the Union. Washington sent more soldiers to the border than twenty-two of the States.

To every demand of devotion and self-sacrifice made upon Americans Washington has rendered, is rendering, and will always render full, hearty, and unstinted response.

Before the judicial branch of the National Government they are, the United States Supreme Court says, less than aliens in the right to sue and be sued.

In relation to representation in the legislative branch and by the executive branch of the National Government they are on the same footing as aliens.

In relation to national taxes their sole function is to pay. They have nothing to say, like other national taxpayers, concerning the amount and kind of taxes they shall pay and how the tax money shall be spent.

In relation to national war their sole function is to fight in obedience to command. They have no voice, like other Americans, in the councils which determine war or peace. They have no representation in the Government which requires them to fight, to bleed, and perhaps to die.

In all the expense of the continental and contiguous United States from ocean to ocean, from Canada to Mexico, every Territory has been exalted into Statehood, and the District of Columbia is the only remaining American community whose people are still compulsory occupants of the National Hospital for Politically Defective and Delinquent Americans.

No Excuse of National Necessity.

These gross discriminations against the Americans of the District of Columbia find no excuse in national impotency or national necessity.

These discriminations are not necessary to the constitutional control by Congress of the ten miles square. Correction of them, Americanizing the District of Columbia, does not destroy or diminish that control. Representation by one out of 436 in the House and by one out of ninety-seven or two out of ninety-eight in the Senate would obviously fall short of giving the District control of Congress. So small a tail could never wag so large a dog.

To give this national representation to the Washingtonians works no change in the local government or in the financial relation of nation to capital. Exclusive power is still in the hands of Congress representing the nation, and the change merely makes the District politically a part of the nation and gives the 360,000 Americans in the District representation in that Congress.

It involves injustice to the Capital and shame to the nation.

In the impressive and inspiring words of Present Wilson:
“We are glad * * * to fight thus for the ultimate peace of the world and for the liberation of its peoples, the German people included. * * * The right is more precious than peace and we shall fight for the things which we have always carried nearest our hearts- for democracy, for the right of those who submit to authority to have a voice in their own governments.”

Washingtonians are among “those who submit to authority.” Are not all Americans then fighting in this war for the Washingtonians’ right “to have a voice in their own government?” Or is there an implied proviso in our proclamation which causes us to fight in this war to establish representative government everywhere in the world except in the capital of the great representative republic?

Consistency and justice; national pride and self-respect; the will to efface a shameful blot from the national escutcheon; the spirit of true Americanism and righteous hatred of autocracy in any guise; the patriotic impulse toward full preparedness of the nation as the champion of democracy and representative government everywhere in the world- all combine to make irresistible at this very moment our appeal for the adoption of a constitutional amendment giving suffrage to the citizens of the District.

Should not the nation, irrespective of the just pleas of the Washingtonians and purely as a national concern, abolish the evil and injury working paradox of non-representative un-American government of the National Capital territory under exclusive national control? At a time when all Americans are thrilling in response to the appeal for purer, higher, stronger Americanism and for more devoted and self-sacrificing spirit of American nationality will not the nation insist, in accordance with the spirit of the times and in its own vital interest, that there shall no longer exist at the very heart of the body politic this foul abscess of non-Americanism? Surgical relief to the nation from this threat of blood poisoning is an essential war measure, an urgent patriotic task. Cut it out unflinchingly? Cut it out at once. 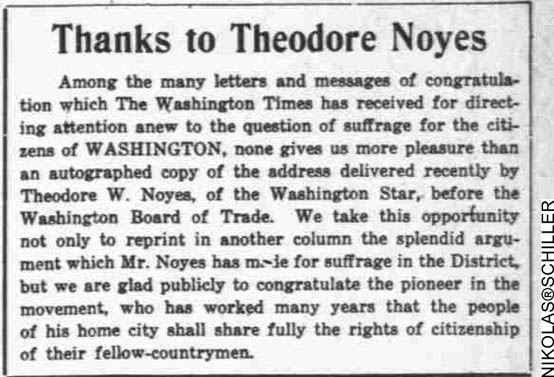