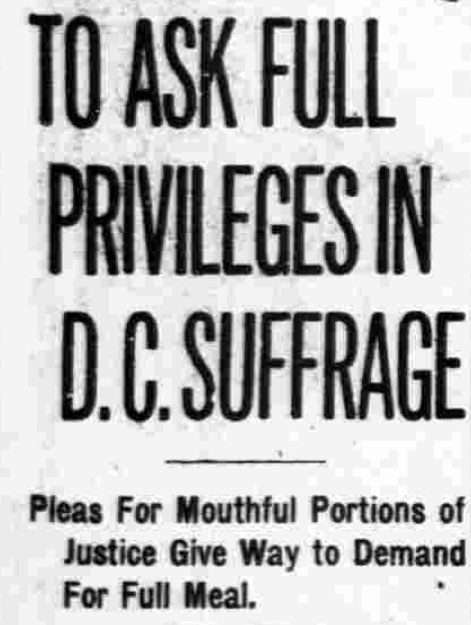 TO ASK FULL PRIVILEGES IN D.C. SUFFRAGE – Pleas For Mouthful Portions of Justice Give Way to Demand For Full Meal. By Bill Price, The Washington Times, April 10, 1919

The confident opinion, expressed in all parts of Washington, that Congress will at no distant date provide the machinery for suffrage in the District is leading civic leaders here to the conclusion that nothing will be gained by laying before the national legislators a minimum program; that Congress will be inclined to liberality when it acts and will give the people here a maximum of the rights that go with the suffrage of free Americans.

A number of leading officials of citizens’ associations who have been discussing this subject recently in the light of the strongly developing sentiment in Congress for suffrage here have about come to the conclusion that Congress should be asked grant full voting privileges except in such matters as the Constitution reserves to Congress, especially as to exclusive legislation over this slice of Federal Territory.

In halting, hesitating fashion many advocates of suffrage in the District have for a long time recommended asking for a mouthful of justice at a time instead of A WHOLE MEAL. In this manner there would come to Washington citizens in the course another fifteen or twenty years about half the suffrage rights now accorded to other Americans.

T. J. Donovan, the capable head of the Central Citizens’ Association, has recently been going into this subject in detail with other civic leaders, including Theodore Noyes, chairman of central suffrage committee, named by various civic organizations many months ago.

“A very large number of citizens who have expressed their ideas of local suffrage in my presence lately are very definite in their convictions,” said Mr. Donovan today, “that while they recognize it as axiomatic that for all time we must maintain a Federal status in the District, with exclusive right in Congress to legislate, they have no difficulty in harmonizing this with their right to choose the members of the Board of Commissioners of the District, the Board of Education, the Board of Children’s Guardians, the Public Utilities Commission and kindred other administrative officers. None of them can see good reasons why doing of this would conflict in the least with authority of Congress to retain legislative control over the District.

“The President of the United States is really too busy to be compelled to pass upon the qualifications of men for administrative officers, and it is reasonable to assume that all men chosen by the electorate would work in harmony with Congress.”

Mr. Donovan is convinced that the time has come to stop supplication for representation in the Senate and House and the Electoral College for the District. The question, as he sees it, should be submitted to Congress as a demand from American citizens who have done their share in every activity of peace and war, and whose records in money and men given to the Government for the war with Germany were better than those of a number of States of the Union.

“I am confident that when American citizens outside the District comprehend the status of the people here they will absolutely demand that their Senators and Congressmen correct the injustice so long done to the people of this city,” went on Mr. Donovan. “Therefore I say that the time for that justice is close at hand, and that we should ask for all that we are entitled to rather than humbly asking for a bit of legislation at a time.

“Our trouble in the past, and that is now being overcome through the co-operation of all citizens, is that the citizens of the States were not aware of the fact that to be a citizen of the Federal Capital carried with it the stigma of forfeiture of every right our forefathers fought and died for, and which our sons and brothers went overseas and laid down their lives for.

“When they ascertain that the principle of self-determination is to be made by the peace conference to apply to dozens of little nations in Europe and not to the enlightened citizens of the city of Washington, they will have something effective to say. All indications we now have are that they are already beginning to say it.

“Seventeen thousand District boys went into the army to fight for democracy; the more than 400,000 citizens who were left behind exceeded the same number of people in any other part of the United States in Liberty bond and war stamp subscriptions. Thus measuring up to the every demand of their Government, meeting every crisis like real men, is there any longer opposition to Washington people being given the same right of self-determination as the Turk, the Bulgarian, the Greek, Rumanian, Serb, and others?”