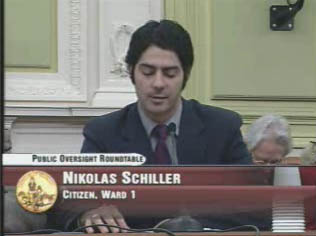 Skip to the 49 minute mark

TESTIMONY OF NIKOLAS R. SCHILLER
ON
THE POTENTIAL RENAMING OF THE 1300 & 1400 BLOCKS OF PENNSYLVANIA AVENUE & THE INCLUSION OF STATEHOOD LANGUAGE ON THE DISTRICT’S GATEWAY SIGNS


I would like to thank Honorable Councilmember Michael A. Brown and the Committee on Housing and Workforce Development for holding today’s public oversight roundtable on the possible renaming of the 1300 & 1400 blocks of Pennsylvania Ave. and the inclusion of statehood language on the District’s “Gateway” signs. My name is Nikolas Schiller and I have been a resident of the District of Columbia for a little over ten years now and for over half of that time I’ve been a vociferous advocate for full equality for the 600,000 District residents. My brief testimony today will highlight some concerns and ideas that I believe will be of use to the Committee.

First, I would like to request that all Councilmembers read Article 1, Section 2 & Article 1, Section 3 of the United States Constitution. It clearly says that representation in the House of Representatives and in the Senate is available to members of the several States and as we know DC is not a state, yet. But yesterday D.C. Delegate Eleanor Holmes Norton announced that she has introduced 3 bills in Congress that will help achieve equality for District residents. However, two of her bills ignore those two important sections of the Constitution, but her third bill is something we should all support: Statehood for the District of Columbia. Yet, I would like to posit to the members of the Committee on Housing and Workforce Development that the District Council should not overlook the proven strategy of amending the United States Constitution, which was already done once on behalf of the District of Columbia. In fact, it can be said that we would not be sitting here today if it were not for the passage of the 23rd amendment to the United States Constitution. Therefore, its unwise to myopically hope for statehood through a simple Congressional vote, when we can also receive full equality & statehood through a subsequent Constitutional Amendment.

With that said, I am unsure of the District Council’s authority to rename the 1300 & 1400 blocks Pennsylvania avenue. Since 1965 that stretch of Pennsylvania Avenue has been subsumed by the Pennsylvania Avenue National Historic Site, which is technically under the jurisdiction of the National Park Service and not the DC Government. While I am not 100% sure of the protocol, I believe any changes to Pennsylvania avenue would have to go through the Department of Interior and I fear that they might not be too keen on having any politically motivated permanent signs in what is federally considered a National Park. But it doesn’t hurt to try. In fact, we can only expect to change the status quo only if we try.

In regards to the placement of signs on the roads that enter the District of Columbia, I believe the District Council has the authority to erect “Gateway” signs and should do so. The question is then what kind of signs should they be? Until the next census, I believe the District should have signs that say something like “Welcome to the District of Columbia! Home to 600,000 second-class American citizens who pay taxes but are denied representation in Congress” or something very similar, and include the URL statehood.dc.gov. More importantly, the Gateway signs need to be creative, eye catching, and should not be left to the DC Department of Transportation to design & construct. Rather, I believe the total number of ateway signs required should first be ascertained and a formal design competition be conducted by the DC Commission on the Arts & Humanities. This way the District’s artists and designers will be given the opportunity to participate in this important process. The possible result is a series of unique signs that will inform all visitors of our second-class status.

Lastly, I have three somewhat related suggestions. First, we should rename 23rd Street to 23rd Amendment Avenue in order to highlight the importance of the 23rd Amendment to the United States Constitution. As the only Constitutional Amendment that deals with the District, its very important that this historic amendment is memorialized. Second, the expansion of “Adopt of a Street Program” can be used to make similar statehood related messages on streets throughout the District of Columbia. Third, we should reach out to other cities around America and see if they would be interested in renaming any of their streets to highlight the ongoing injustice taking place in the District of Columbia.

Thank you for your time and service on behalf of District residents. I’ll be happy to answer any questions you may have.