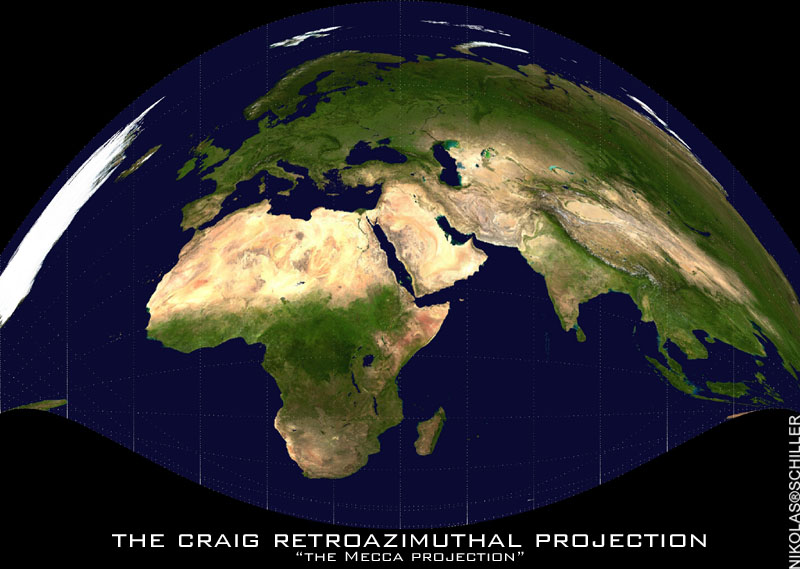 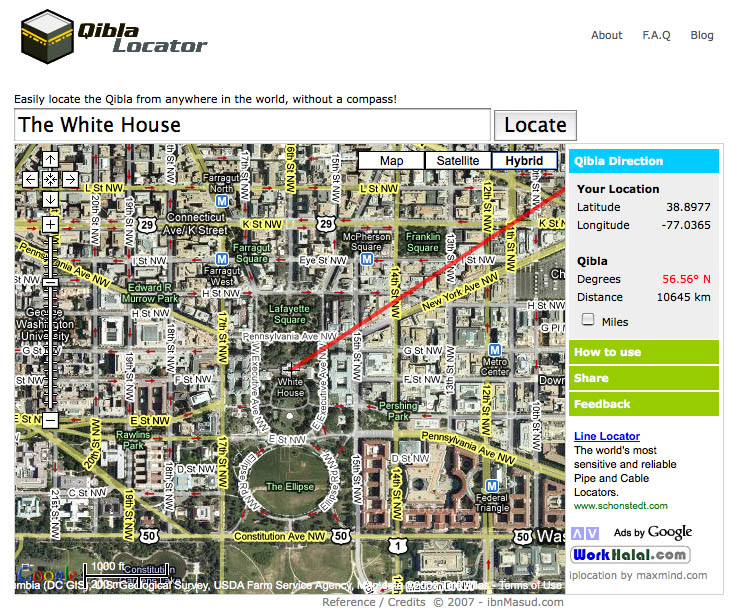 Following up on yesterday’s posting, I stumbled across this interesting Google Map mashup. The Qibla (or Kiblah or Qiblah or Quibla) is the Arabic word for the direction that should be faced when a Muslim prays, otherwise known as the direction of the Kaaba in Mecca. For obedient muslims, the Salah, or formal prayer, is performed five times a day: at dawn (fajr), noon (dhuhr), in the afternoon (asr), at sunset (maghrib) and nightfall (isha’a). The Qibla Locator is a simple Google Map that is designed to automatically orient Muslims toward the direction of the Kaaba. Simply enter your location and the red line that is generated shows the shortest distance to the Kaaba. In the case of the screen grab above I decided to show what direction a Muslim would pray if they were in the White House in Washington, DC. I chose this location because I’ve read about some nutty folks who actually think president Barack Obama is a Muslim. Frankly, I don’t care what religion he practices and to take issue with anyone’s religion is a sign of intolerance and veiled ignorance. What I find most interesting about the Google Map is that the rhumb line toward the Kaaba can be somewhat deceiving. I’m not blaming the author of the mashup, rather, I think the nature of how the Quibla is found is unique. Since its based on the shortest distance to Mecca, sometimes the fastest way seems counter-intuitive, as in, I was thought the path from the White House (above) would be facing South-East instead of North-East. If you have a moment, try it out.

A couple interesting notes from the Wikipedia entry:

• The head of an animal that is slaughtered using Halal methods is aligned with the Qibla.
• Muslims are buried with their faces in the direction of the qiblah. Thus, archeology can indicate a Muslim necropolis if no other signs are present.

A short history of the Qibla:

Originally, the direction of the Qibla was toward Masjid al-Aqsa, Jerusalem (and it is therefore called the First of the Two Qiblahs). At least since Mishnaic times (AD200), Jews face the Temple Mount in Jerusalem while praying. The Mishnah speaks about this in Berakhot (Talmud) chapter 4, Mishnahs 5 and 6 and this practice is even found as early as I Kings 8:35-36. In Islam, this qiblat was used for over 13 years, from 610 CE until 623 CE. Seventeen months after Muhammad’s 622 CE arrival in Medina, the Qiblah became oriented towards the Kaaba in Mecca. According to accounts from the prophet Muhammad’s companions, the change happened very suddenly during the noon prayer in Medina, in a mosque now known as Masjid al-Qiblatain (Mosque of the Two Qiblahs). Muhammad was leading the prayer when he received revelations from Allah instructing him to take the Kaaba as the Qiblah (literally, “turn your face towards the Masjid al Haram”). According to the historical accounts, Muhammad, who had been facing Jerusalem, upon receiving this revelation, immediately turned around to face Mecca, and those praying behind him also did so. 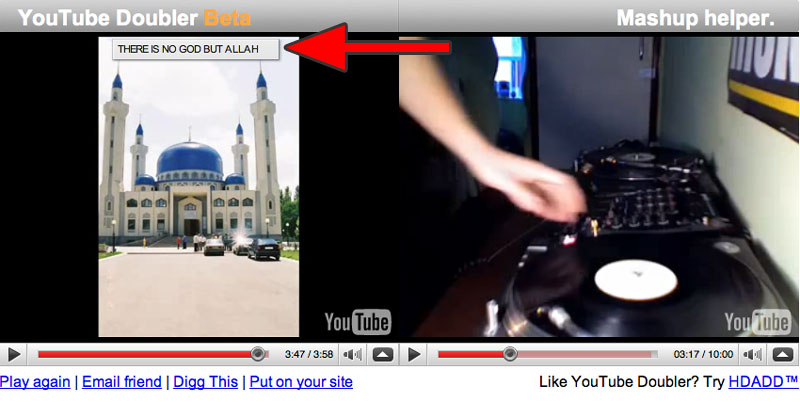 Just under one year ago I created an interesting mashup using Brian Kane’s YouTube Doubler. Dubbed “the Athan Drum & Bass Mashup” (and since then I’ve added “architectural” to the title), the mashup features a slideshow of Islamic architecture on the left side and a stationary camera focused on a Drum & Bass DJ’s turntables on the right. Last night I revisited the original entry and discovered that whomever had uploaded the slideshow decided to transcribe the Athan using YouTube’s annotation feature. Now you can actually read the English translation of the morning call to prayer sung in Arabic.

On August 12th, 2007 I took this screenshot for my blog entry related to the Astro-theological overlays for Google Earth. The project overlaid the zodiac on locations of religious importance: Vatican City, Mecca, and Jerusalem. 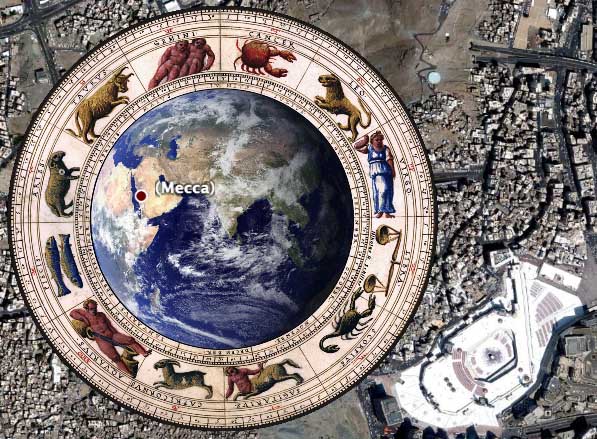 Today I discovered that that the names for the locations have changed in Google Earth. 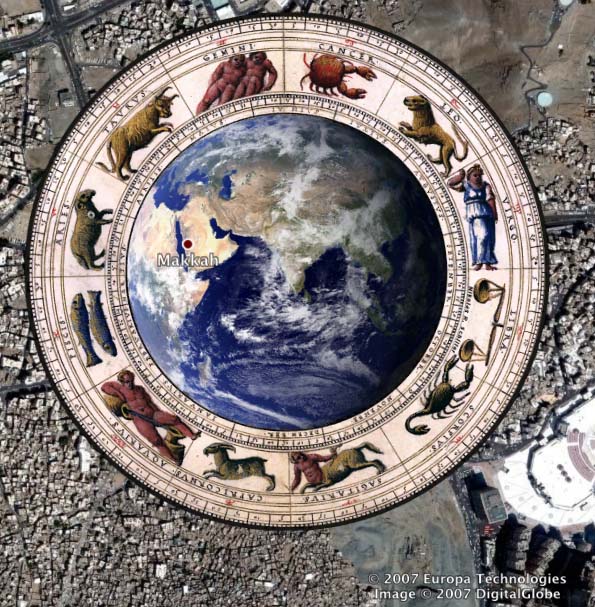 note: the Kaaba is in the lower right-hand corner

My entire life I have always spelled it the city as Mecca. I wonder when this was changed? Should I change my spellings? Some day I would like to visit the holy city of Makkah :-) 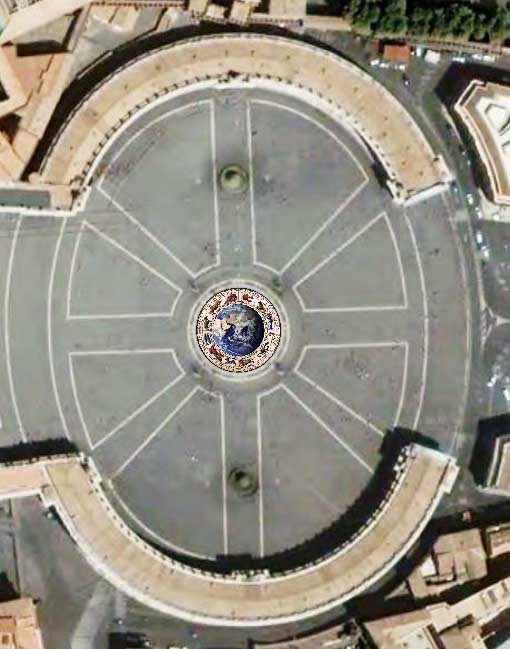