When I got back home from yesterday’s hearing I wrote my friend at the Washington Post the following e-mail:

There was a hearing today about DC’s legislative & budget autonomy.
https://oversight.house.gov/index.php?option=com_jcalpro&Itemid=27&extmode=view&extid=95

Less than 5 minutes later, two officers entered the room, asked me to get up and come with them to the hallway. I obliged and was escorted out to the hallway. They asked for my ID and I asked if I was under arrest, they said not at the moment. They proceeded to run my name through the FBI’s National Crime Information Center to check to see if I had any existing warrants or previous arrests for civil disobedience. They asked for my social security number, for which I declined to provide. Since I came up clean in their records, and promised to not wear my hat for the duration of the hearing, I was allowed to return to the hearing, which had already started, still wearing my purple 18th century overcoat.

My question is: are tricorn hats now illegal in hearing rooms? Are all hats illegal? What about yarmulkes?

In Mary Beth Sheridan’s article from January she indirectly mentioned me wearing the tricorn hat:
https://www.washingtonpost.com/wp-dyn/content/article/2009/01/27/AR2009012703300.html
“one in a purple colonial-style coat and a tricorn hat.”

A month later, I was cordially greeted by Senator Joseph Lieberman as “one of the District’s oldest residents,” while wearing the outfit.
https://nikolasschiller.com/audio/senator_lieberman_greets_the_dc_colonist.mp3
https://www.nikolasschiller.com/blog/index.php/archives/2009/02/11/2280/

With the somewhat recent co-opting of colonial era attire by tea party protesters, do you know if there have there been more arrests on the Hill by people wearing tricorn hats? Or was this just a staffer on a power trip? What does Rep. Stephen F. Lynch think about tricorn hats? I have every intention of carrying on this form of protest in the future until DC residents are fully represented in Congress, but am I going to have to wear a big white wig? Call me if you have a moment.

A couple quick e-mails later I was on the phone with Amy Argetsinger discussing what had happened. Since she already had the e-mail above, there wasn’t that much more to discuss, but I mentioned that their multimedia archives contained a photograph of me in the Colonial outfit that they could possibly use for publication. A few moments later they found the photograph from my Netscape Celebrity? blog entry (a self-fulfilling entry?). She asked if there were any more photographs of me in the Colonist outfit and I told her I would have to find them and get back to her…

Instead of trying to sift through thousands of photographs, few of which containing the D.C. Colonist, I decided to put the outfit back on, put my camera on a tripod, get an extension cord for my lamp, and relocate to my hallway. I placed the tripod opposite my 60″ x 40″ polyester map of the Mount Pleasant Cross and took about 10 photographs of myself using the timer function. I downloaded the photographs off my camera & did some minor color correcting, and sent her six self-portraits. Here is one of the other photos that they chose not to use: 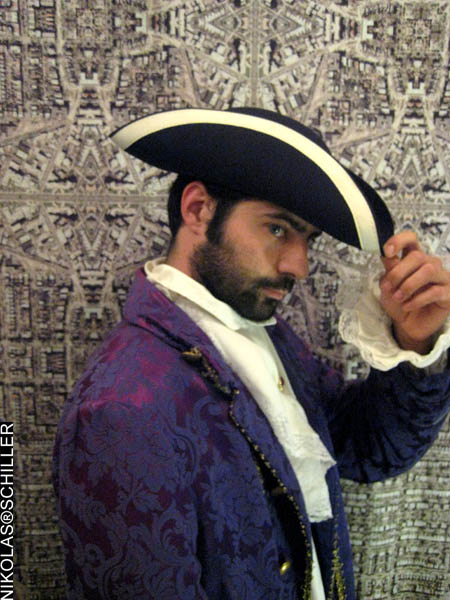 Most of the photos were blurry due to the cheapness of the camera.

Like the difference that I spotted over the summer, the Print Edition contains two captions not found on the On-Line Edition: “Hats off to D.C. Statehood” , “Schiller’s Colonial garb didn’t make the cut this year” And the captions for my self-portrait are slightly different: “Courtesy of Nikolas Schiller” vs “A portrait provided by Schiller.” 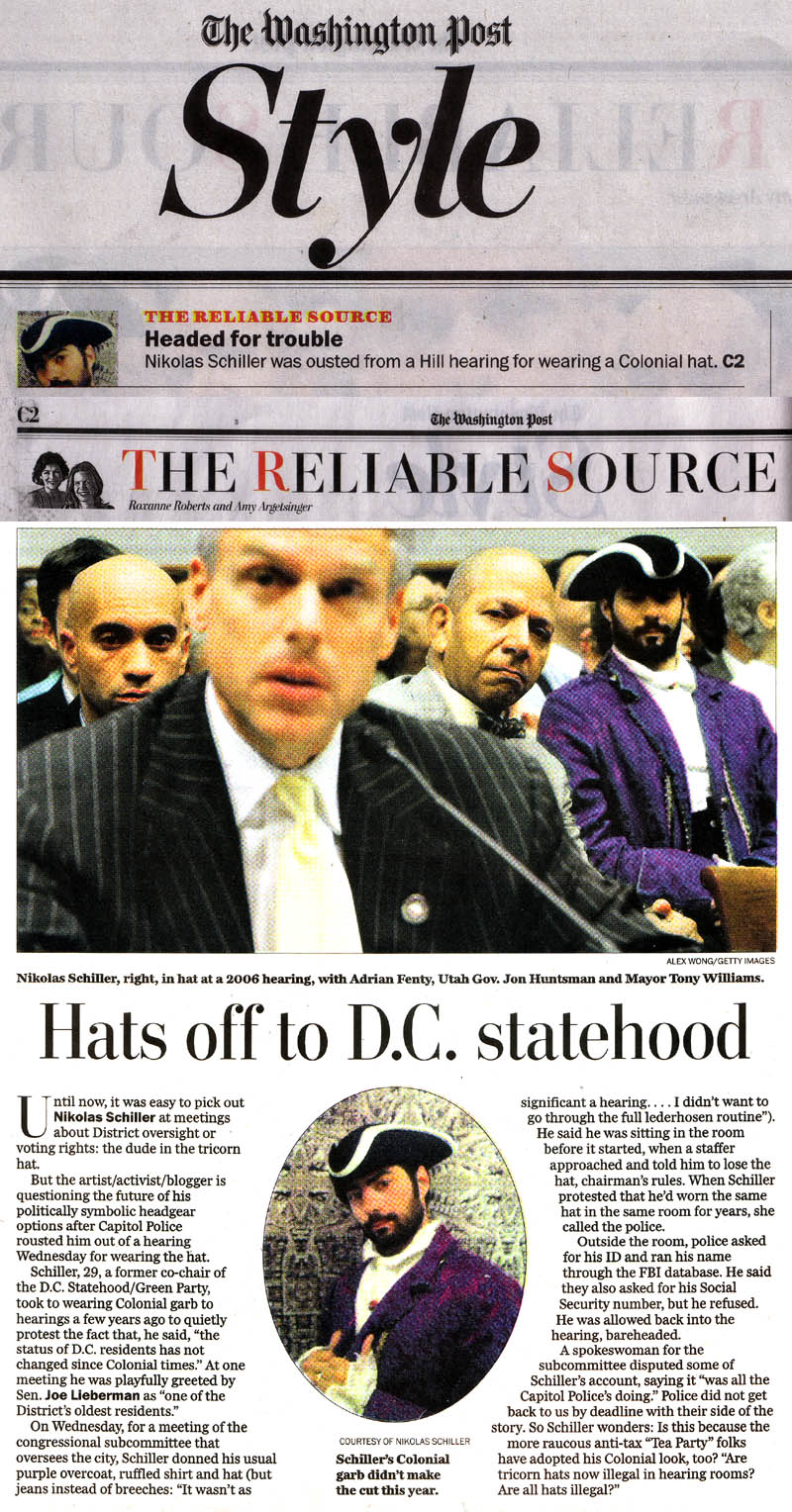 Until now, it was easy to pick out Nikolas Schiller at meetings about District oversight or voting rights: the dude in the tricorn hat.

But the artist/activist/blogger is questioning the future of his politically symbolic headgear options after Capitol Police rousted him out of a hearing Wednesday for wearing the hat.
Schiller, 29, a former co-chair of the D.C. Statehood/Green Party, took to wearing Colonial garb to hearings a few years ago to quietly protest the fact that, he said, “the status of D.C. residents has not changed since Colonial times.” At one meeting he was playfully greeted by Sen. Joe Lieberman as “one of the District’s oldest residents.”

On Wednesday, for a meeting of the congressional subcommittee that oversees the city, Schiller donned his usual purple overcoat, ruffled shirt and hat (but jeans instead of breeches: “It wasn’t as significant a hearing. … I didn’t want to go through the full lederhosen routine”). He said he was sitting in the room before it started when a staffer approached and told him to lose the hat, chairman’s rules. When Schiller protested that he’d worn the same hat in the same room for years, she called the police.

Outside the room, police asked for his ID and ran his name through the FBI database. He said they also asked for his Social Security number, but he refused. He was allowed back into the hearing, bareheaded.

A spokeswoman for the subcommittee disputed some of Schiller’s account, saying it “was all the Capitol Police’s doing.” Police did not get back to us by deadline with their side of the story. So Schiller wonders: Is this because the more raucous anti-tax “Tea Party” folks have adopted his Colonial look, too? “Are tricorn hats now illegal in hearing rooms? Are all hats illegal?”