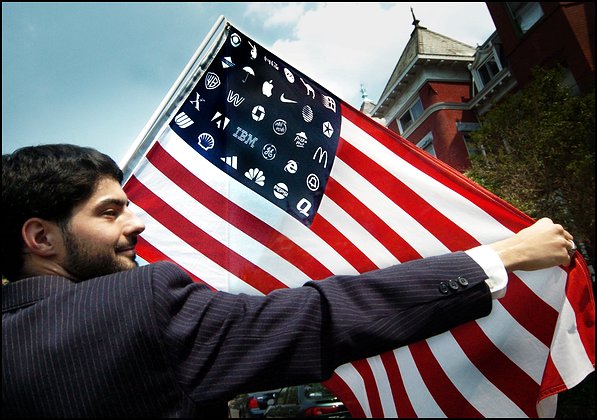 “People scoff at it, or say mean things to me, but they all understand the idea of the flag: that America has been bought by the corporate system,” says Schiller, who, at other protest opportunities, has used his corporate flag as a cape. After showing on his home computer some footage of his activist adventures, he admits that wearing the flag that way was “stylistically dorky.”

Other than that, Schiller seems to sport some real anti-corporatist cred. He says he found on the street the old pair of Nike sneakers that he’s wearing, which essentially renders them a neutral prop in the “street theater” of his activism. He goes on to explain, more desperately than he needs to, that the used Steve Madden shoes peeking out of his closet cost him just $5, and he bought them at a sale benefiting blind kids.

“I think waving the flag on the Fourth of July is a great time to do it,” Schiller says. “People are expecting total patriotism, and here I am with an image of poetic dissent.”

More recently, Adbusters has put out a call to all “culture jammers,” a term for people who disrupt the status quo of corporate influence. Their mission: Use the corporate flag today to spark political fireworks. “This Fourth of July marks a day of independence for corporations, not for Americans,” says Kalle Lasn, editor-in-chief of Adbusters, from his office in Vancouver, B.C. “I think many more people on July 4 will create some real debate by waving these flags around, and that’s a healthy thing to do.”

Since the corporate-themed flags first emerged, around the time of the 1999 WTO protests in Seattle, they have been widely used in activist circles. They’ve been unfurled at protests outside the doors of the Republican and Democratic conventions in 2000 as well as last year’s large antiwar demonstration in midtown Manhattan.

Today, however, marks the first time the corporate flag will act as the primary focus of a national campaign. (Other notable Adbusters campaigns include Buy Nothing Day, which happens the day after Thanksgiving, and TV Turn-Off Week, slated for April.) According to Lasn, 50,000 of the flags have been sold worldwide, with over 6,000 sold, at $15 each, for this Fourth of July campaign alone.

In addition, the campaign’s Web site, UnbrandAmerica.org, raised over $60,000, which allowed Adbusters to place a full-page ad in the New York Times last Monday. It featured the flag along with several manifesto-like sentences written in a crayon font. Part of it read: “Because consumerism has become our new religion. Because a small group of neocons has hijacked our national agenda . . . I pledge to do my duty and take back my country.”

The corporate flag also has a scene in the new documentary “The Corporation,” which opens in Washington on July 16. The film examines corporate power — from the patenting of living organisms to market research into how children can nag their parents for candy and toys more effectively — with a startling array of facts and figures. The only problem is, the documentary is more than 2 1/2 hours long.

“That’s why I think this Adbusters flag is a very powerful and clever tool to make this point,” says Joel Bakan, writer of the documentary and author of an accompanying book, “The Corporation.” The average person finds anti-corporate speeches rather dull, he says.

“But when you have a graphic representation, it’s very powerful — people get it in an instant,” says Bakan. “What this flag does is make people look at these companies not as makers of products but as governing institutions that are driving policies in this country.”

But Adweek’s Mark Dolliver, an editor at large who specializes in print-ad criticism, thinks that’s wishful thinking. Dolliver agrees that most people are mistrustful and even hostile toward corporations, but only in the abstract.

“By using familiar logos of specific brands that people buy and enjoy all the time, I think Adbusters upstages its attack,” Dolliver says. “The whole point of these logos is that they powerfully evoke the particular products for which they stand. So, if it’s ‘corporate power’ that gives us cola and pizza and sneakers and Bugs Bunny, then a lot of people are going to conclude that it’s not such a bad thing after all.”

Dolliver says people take in logos and their significance without even making an effort to do so. “My hunch is that many people will enjoy testing their brand literacy by seeing how many of the icons they recognize. I know I did.”

Adbusters wasn’t being scientific in choosing the flag’s logos, Lasn says. The flag is an artistic statement, not a top-30 list of corporate wrongdoers — although he admits he particularly loves to hate the corporate practices of Nike and the pharmaceutical company Eli Lilly.

“I think it’s a mistake to compare these companies in terms of who’s worse and who’s better,” he says. “The flag just says that we’re all part of a corporate state. You know, there was a time when the people sang the songs and told the stories, which created our culture from the bottom. Now it’s the corporations who are singing the songs and telling the stories — from the top to the bottom. They’re spoon-feeding us.”

A complication arises: What if that’s absolutely true? Suppose someone on the Mall sees the golden arches on the flag and begins to hear the commercial jingle in his head. Could the flag be doing more harm than good?

No need to worry about Schiller being overwhelmed by the branding onslaught; he knows how to handle the corporate giants. “I’m planning to bring my own food,” he says. “Probably some bagels and hummus.”