Text and screen grab below:

UPDATE III: Facebook objects to the pot leaf under medical circumstances, as well. As Washington, D.C.’s city council was debating how to write regulations to permit the cultivation and sale of medical marijuana, the District of Columbia Patients’ Cooperative took out Facebook ads to encourage city residents to attend the hearings, the cooperative’s Nikolas Schiller tells HuffPost. Facebook shut it down, though the hearings went on regardless. The ads contained a pot leaf and were, like the others, initially approved and later rejected.

“The aim of the District of Columbia Patients’ Cooperative use of targeted Facebook ads was to engender community support for the DC medical cannabis law which had been placed on ice for 12 years by Congress,” said Schiller. “We created the ads to target those on Facebook who are sympathetic to the subject and might be interested in coming to District Council hearings and meeting with elected officials. While we were able to organize through Facebook, our efforts were severely hampered by Facebook’s continued rejection of our ads. The ads ran between between January and May 2010, with the final rejection on May 10th–the ad stated “Have you spoken to your doctor yet? You will soon be able to use medical marijuana with a recommendation from your doctor!” and contained a cannabis leaf with the DC flag superimposed over it.”

Here’s an example of a banned Facebook ad that I created: 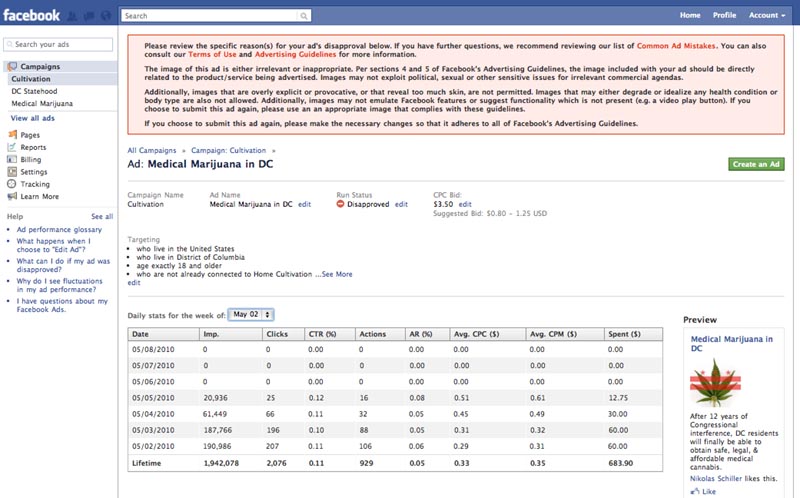 Click image to view a larger version of the screen grab.

If you haven’t yet, you can always click here to become a fan of Medical Marijuana in DC.