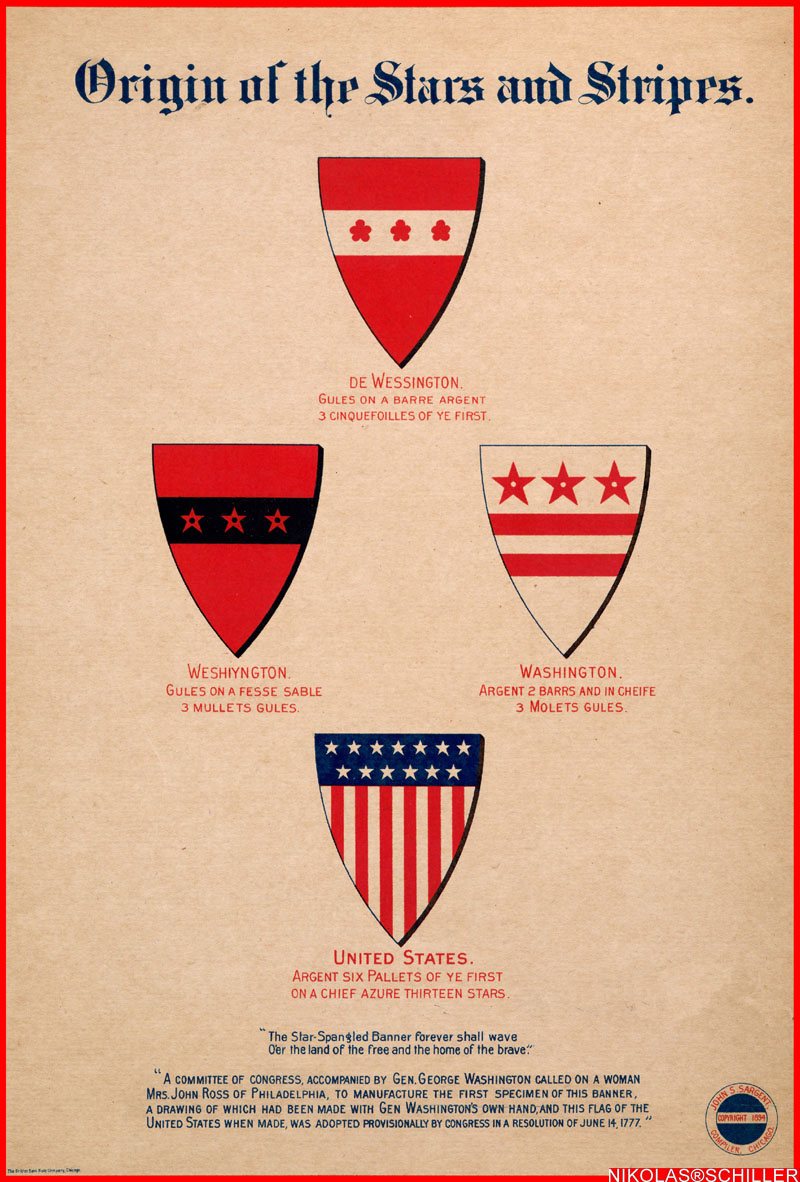 Original image created in Chicago, 1894.
From the Library of Congress’ An American Time Capsule: Three Centuries of Broadsides and Other Printed Ephemera.

Some time in the future I’d like to read more deeply into heraldry and come up with my own Coat of Arms. Today there is so much talk about name branding that I think it would be an interesting juxtaposition where my Coat of Arms could visually explain some subtle details about me. My motto would either be Socio Ditata Labore or Gloria Immortalis Labore Parta, but how would I go about designing the shield? That is where I am currently stuck at, but I imagine that if I were to dig deeper into the arcane traditions of heraldry, I would come up with something fitting.

About two months ago I was rummaging through the Library of Congress’ An American Time Capsule: Three Centuries of Broadsides and Other Printed Ephemera and came across the image above. I knew that the DC flag was based off of George Washington’s family crest, but I didn’t know that it had been changed over the centuries prior to his family’s arrival in America. Moreover, I didn’t know that the city I currently live in, Washington, DC, might have been called something completely different…

From a New York Times’ Letter to the Editor published on April 8th, 1984:

Eberhartpence, Eberhart, Hartpence, Hart – what’s in a name? Indeed, had it not been for a change of name back in the 12th century, our nation’s capital might be Hartburn, D.C.

You see, when George Washington’s British ancestor William de Hartburn moved from Hartburn to Wessington in 1130, he changed his name to William de Wessington, which later became de Washington. The ”de” was dropped when the family arrived on these colonial shores around 1659.

Had William retained his original name, the father of our country would have been one ”George Hartburn.”

Imagine that– a gastrointestinal themed capital city. The people’s pyrosis!

I bet the George Hartburn University would have an even better medical school too! It makes me wonder if there would even be a Hart Senate office building, lest someone get the wild notion of burning it down. Or what about the lexical ramifications of when the British torched Washington in the War of 1812? Would this alternate history be called The Burning of Hartburn? I can only laugh and, of course, take some antacids.

A very long time ago, a couple weeks after the reelection of George W. Bush in November of 2004, I wrote that my most recent map looked similar to the gas mask I had purchased days prior:

Yet living in DC with 4 more years of Bush, I am expecting some acid reflux in the belly of the beast…

While there was only one case of acid reflux to hit Washington, DC during the subsequent 4 years, and a mild case at that, I can laugh again at this alternative history double entendre. Acid reflux in the belly of the beast? Only if George Washington’s ancestor didn’t change his name.