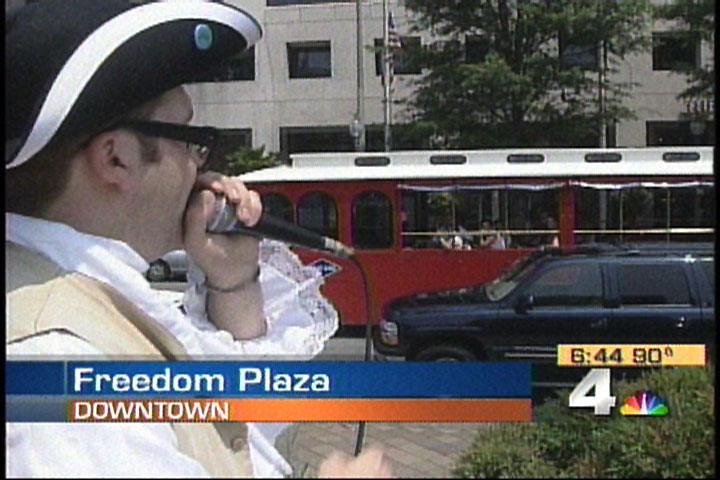 I spoke with Parliamentarians from Turkey, France, Finland, Norway, Italy, and quite a few others. One of the Finnish Parliamentarians even spoke on the pa system we had setup on the street. After the Parliamentarians entered their morning meeting Adam & I went back to his place for some lunch and came back at 11:30am for the Rally.

When we arrived DC Vote had the voting booths setup and the camera men from NBC4 and Newschannel 8 were setting up. Adam proceeded to setup the sound system on Freedom Plaza facing the smoking area on the south side of the J.W. Marriot. When a group of the Parliamentarians got off a bus, he started to speak to them and ask if they wanted to come to our rally (across the street). The NBC4 camera man recorded this, and was later used this in their evening news story.

At around 12:15pm the rally officially began with a few speakers talking about the importance of democracy here in DC and how what we were doing was so important. I mainly walked around during the rally saying hello to people and being apart of the political theatrics. It was a lot of fun, but really really hot. I drank so much water, and I’m happy I didn’t suffer heat stroke! I ended up taking off the colonial robe to stay cool.

Of all the speeches given Tim Cooper’s speech was by far the best. I’m very glad he was given a chance to speak, because none of these festivities would be taking place if it wasn’t for him. His work on bringing the International Community on board with the DC Voting Rights movement is why we were lobbying the OSCE. I had heard of the OSCE before, but would have never known they were having their annual meeting in DC.

After the rally, everyone moved to the sidewalks surrounding the J.W. Marriot. Groups paced back and forth around the corners of the hotel, gaining the attention of all the Parliamentarians as they returned back from lunch. Adam’s sound system was used to help rally the marchers on the sidewalks. Slowly just about everyone left and went on with their days, and the DC Vote crew proceeded to move the voting booths back into their moving truck.

A few us of the more dedicated voting rights activists stayed at the J.W. Marriot waiting for Frist, Hastert, and Rice to show up. The OSCE nicely gave the entire world their itinerary, so we knew that the 3 would be showing up at around 2:30pm. And sure enough they did…And I personally got to heckle them!!! Can you imagine an irate colonist yelling at the top of his lungs with a sign that says “We want Equal Voting Rights through Statehood.” I think I actually scared Hastert! It was great!

I must say that the security apparatus was a joke, we could spot the undercover Secret Service agents quite easily! The advance team was just as easily noticed. The bomb sniffing dogs walked the area during the rally so we knew that they were in fact following the draft itinerary. I realized that they were going to enter through the side garage because the agent in the suit was just waiting at the corner with his finger in his ear. All I had to do was look over my shoulder and see the two black SUVs with their lights on to realize who was coming. Regardless, I am pleased that I was able to lobby the hypocrites who speak about bringing democracy to the world while denying democracy at home.

Best of all, the rally got some great press from the Washington Post (below) and I spliced together the NBC4 and Newschannel 8 footage with Rep. Tom Davis (R-VA) answering a question about the OSCE being lobbied by us and a couple commercials from Williamsburg.

Check out out the video highlights!

D.C. voting rights activists took their case to an unusual constituency yesterday, calling on European legislators at an international meeting to lean on the U.S. government to give Washingtonians full representation in Congress.

“O-S-C-E, free D.C.!” chanted scores of demonstrators parading in front of the J.W. Marriott on Pennsylvania Avenue NW, where legislators from countries in the Organization for Security and Cooperation in Europe were opening their annual meeting.

The 55-member OSCE includes countries from Europe and the former Soviet Union, as well as the United States. The OSCE grew out of the Helsinki process of the Cold War period, which established human rights as a global foreign policy concern and tried to spur greater freedom in the Soviet bloc.

The current OSCE meeting, which lasts through Tuesday, will address such issues as gender equality and human rights. But to local activists, nothing matters more than a proposed amendment that calls on the U.S. government to give D.C. residents “equal voting rights in their national legislature.” The measure is expected to be considered today or tomorrow.

Eleanor Holmes Norton (D), the District’s non-voting delegate in Congress, introduced the amendment with the support of four other legislators in the 12-member U.S. delegation to the OSCE meeting. Delegates from Canada and Switzerland also were sponsors.

At a noontime rally yesterday in Freedom Plaza, in front of the Marriott, Norton assured a spirited crowd that she would press European parliamentarians to back the measure.

“I will be telling them, ‘Do not let the United States government get away with pushing around every other country, insisting on democracy, then coming home and pushing us out when we insist on democracy,’ ” she said.

Cheers rose from the audience of about 200, including perspiring office workers in shirtsleeves, mothers clutching babies and Faith, an exotic ballet dancer and six-time mayoral candidate, who was clad in a U.S. flag, fishnet stockings and red boots.

The activists hoisted signs in French, German, Russian and other languages demanding the right to full representation for the District. In case the message did not get through, however, organizers set up four voting booths enclosed by a chain-link fence in one corner of the plaza. The fence was festooned with yellow-and-black signs warning: “DC Residents Out! By Order of Congress.”

“Our hope is that passage of the resolution will further the cause by putting international pressure on the Congress,” said Ilir Zherka, executive director of DC Vote.

Andreas Baker, a spokesman for the OSCE, said that if the D.C. measure passed, it would not have the force of law. It would, however, be included in a final document distributed to the member countries.

“It’s essentially the voice of parliamentarians from the 55 [countries]. So it’s a recommendation which tends to carry a bit of weight,” he said.

An OSCE mission that monitored last year’s U.S. presidential election issued a report recently that stated that the U.S. government denies full representation and voting rights to residents of the District.

It was not clear whether the D.C. voting-rights measure would be supported by the entire U.S. delegation, which is composed of six Democratic and six Republican members of Congress. A phone call to the office of Sen. Sam Brownback (R-Kan.), the head of the U.S. delegation, was not returned.

Voting rights activists were scrambling yesterday to make sure the approximately 300 OSCE delegates were aware of the District’s special status. They handed out leaflets, marched with signs outside the Marriott and even buttonholed individual legislators.

David Bardin, 72, a retired D.C. attorney, grabbed a Spanish official, Gustavo Pallares, outside the Marriott and quickly filled him in about the local voting situation.

“So you don’t have a representative in the U.S. Congress?” said Pallares, puzzled by the idea.

Many legislators simply ignored the protesters. But not Jean-Claude Lefort, a parliamentarian from France. Slapping a “Taxation Without Representation” sticker onto his suit jacket, he walked up and down the line of protesters, shaking hands.

“I support them,” he said, explaining his feelings with the French national motto: ” LibertÃ©, EgalitÃ©, FraternitÃ©.”