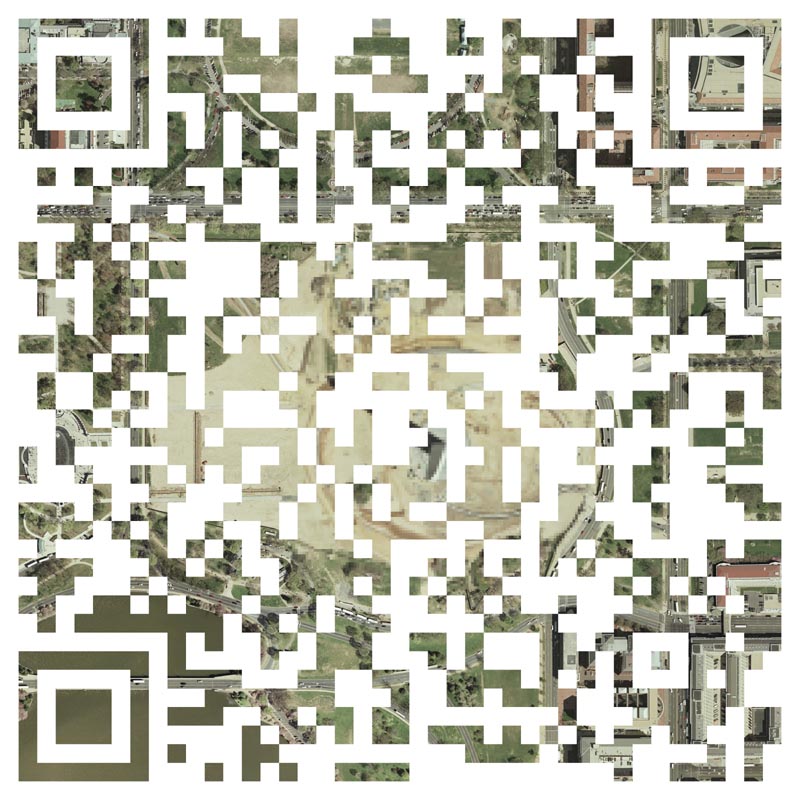 QR Code is a two-dimensional bar code created by Japanese corporation Denso-Wave in 1994. The “QR” is stands for “Quick Response,” and it operates very similar to traditional bar codes, but allows for more customization. QR Codes are common in Japan where they are currently the most popular type of two dimensional code. In recent weeks I’ve read about some very interesting uses of the code and decided to make something with it.

Continuing on the topic of censorship, I went through my digital archives and found the official USGS aerial photography of the area around the Washington Monument. I’ve known since mid-2007 that the area around the Washington Monument, White House, and U.S. Capitol were censored by pixilation prior to release. Since the QR Code has a pixilated appearance I felt that they could play well off of each other.

But what to say?
Why not the truth: The 2005 USGS aerial photography of the Washington Monument is censored

Kawya has a nice QR Code encoder/decoder for URLs, text, phone numbers, and SMS. I typed in the phrased and hit generate. Then I saved my new QR Code image and opened up my photo imaging application. Since the source aerial photograph was about 6,300 x 7,600, I decided to scale up the QR Code to 6,000 x 6,000 in size. Once this was done, I removed all of the negative space (black coloring) from the original QR Code and placed the censored aerial photograph below the code.

: detail of a censored Washington Monument : 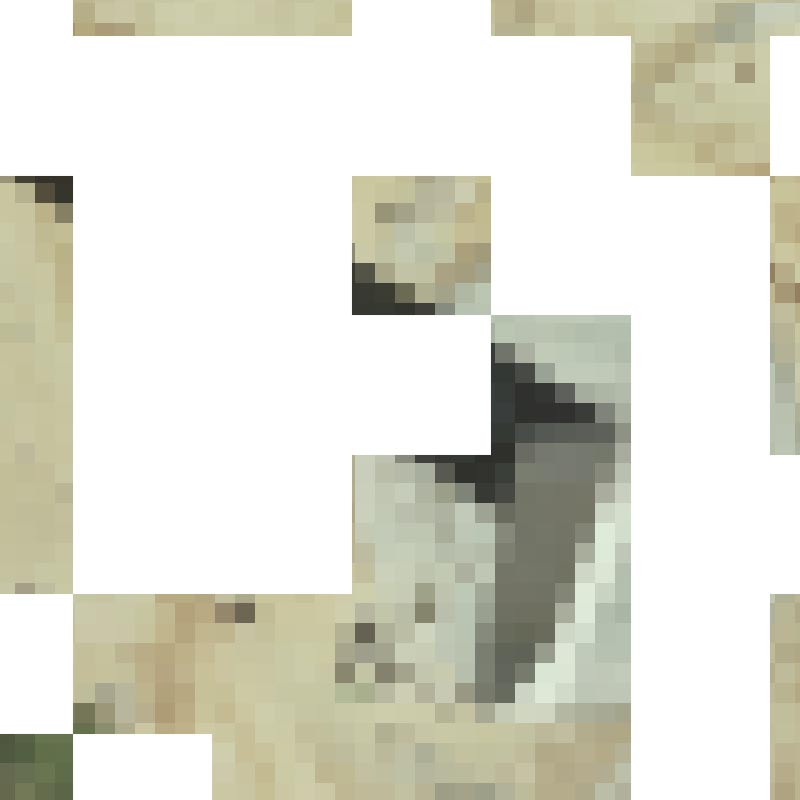 I wonder if the code still works? Will the shadows truncate the content? Should I have removed the positive space (white color) instead? I don’t know, but I hope to find out. Or more importantly, I hope to get a reader installed on my phone. I spent 3 hours trying to get it to work but with no luck!!

In summary, Geovisual QR Code is more of a visual hacking experiment. Its not as meta as turning a corn field into semacode (a similar 2-D barcode), and it’s probably already been done by someone else at a different time. My null hypothesis is that it does not work, and I look forward to finding out the result.

Next up will be a t-shirt with this website’s URL QR Code on it. This way if someone take a picture of me, they’ll know how to find me.

: Null Hypothesis was correct: the Geovisual QR Code v.01 did not work 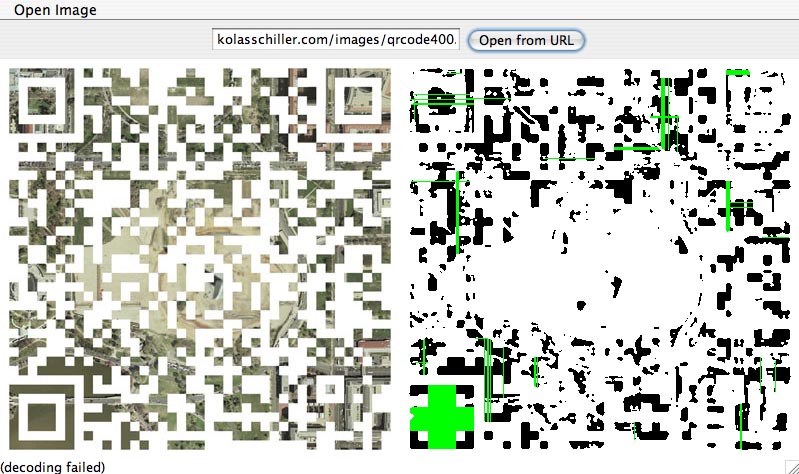 I am going to try adding a stroke outline of black. Might work—–

#UPDATE APRIL 13 – 1pm#
The stroke did not work either. I tried both internal and external. Miami Quilt was chosen at random to be a test background. 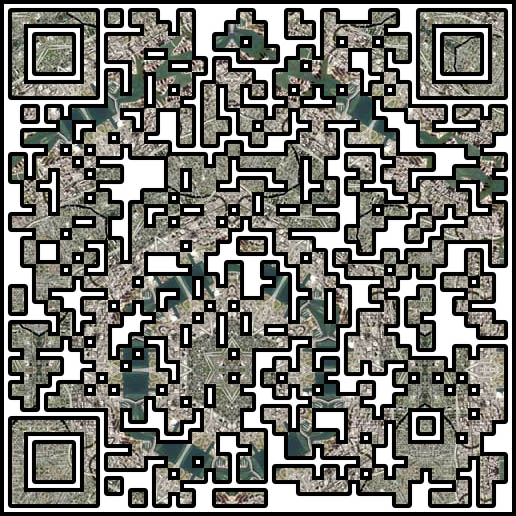 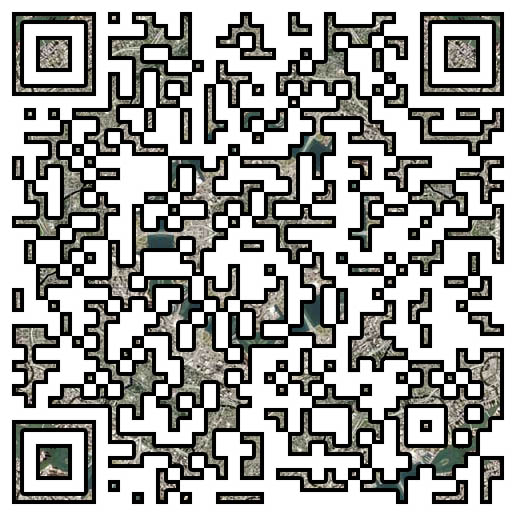 Final summary: You can’t change the negative space on a QR-Code and expect the code to be valid. 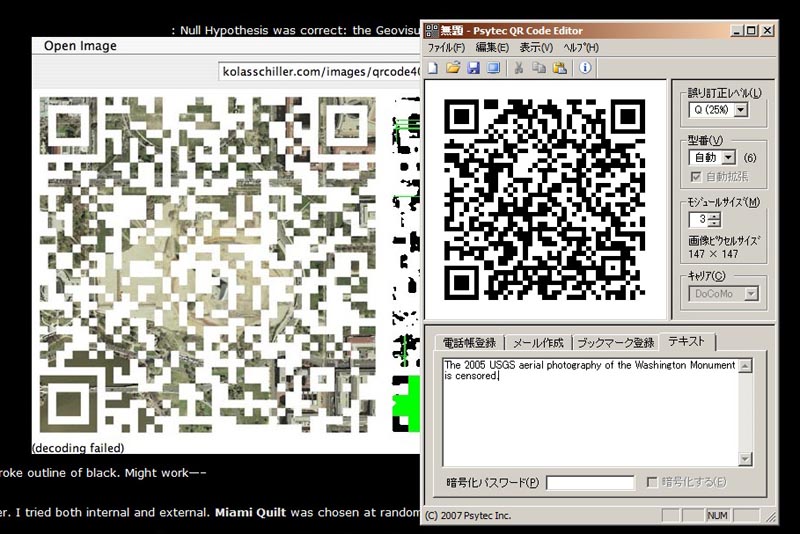