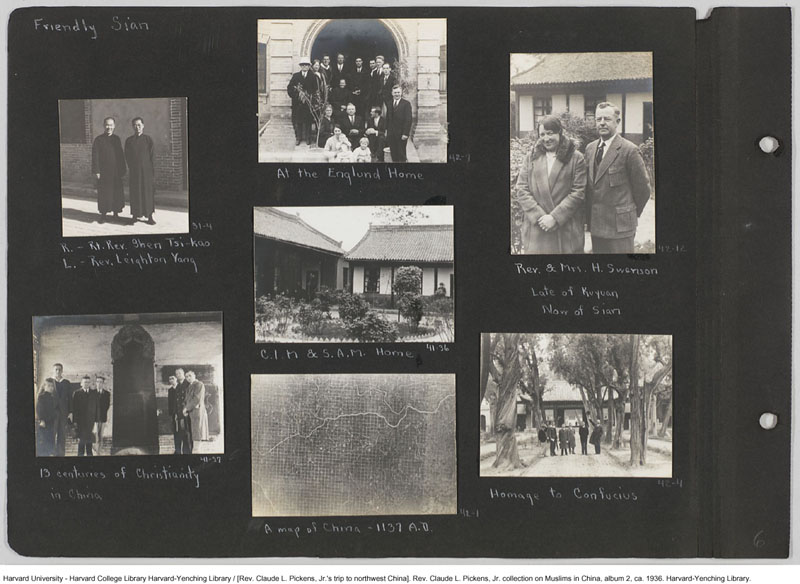 Last night I came across Harvard Library’s digitized photo album of Rev. Claude L. Pickens, Jr.’s trip to northwest China. Of all things to have on the inside of the album cover, there was a small map showing “Moslems in China”. After flipping through a few pages I spotted a photograph of one of China’s most famous maps: the Yu Ji Tu. 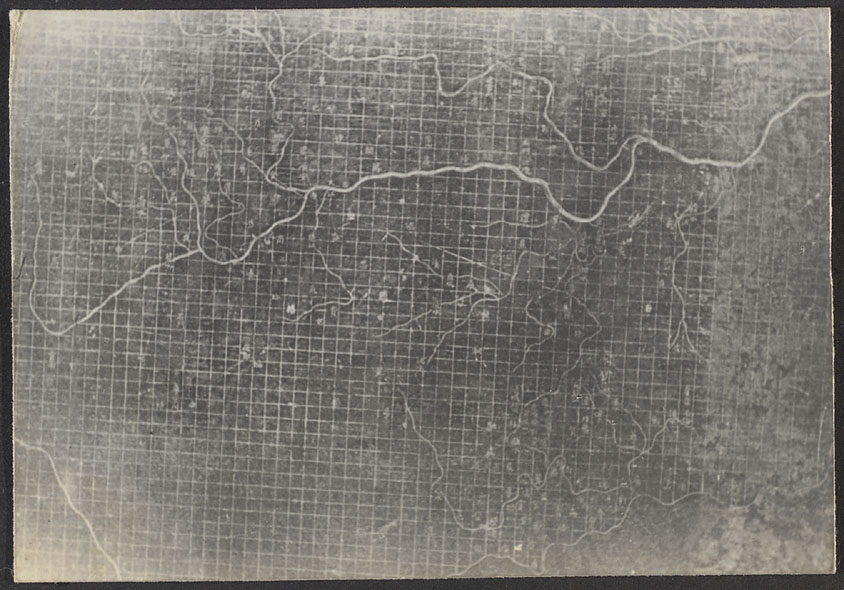 Photograph of the Yu Ji Tu by Rev. Claude L. Pickens, Jr.
Image from the Harvard University Library
NOTE: The library’s record does not cite the map properly

Yu Ji Tu, or the “Map of the Vestigate of Emperor Yu” or the “Map of the Tracks of Yu”, is one of my favorite maps in the world. Not only does it show China’s coastline and river systems accurately, it’s also a printing press. Carved into 3 foot piece of stone in 1137 AD it’s also one of the heaviest maps. It features a large grid of 100 li squares (about 40.5 km or about 25 miles) that can rubbed on to paper to make duplicate maps– well before the modern-day printing press was invented. It’s located in the Stele Forest of Xi’an (written as Sian by Rev. Pickens), a town in Northwest China that has thousands of years of human history due to its location along the Silk Road.

A rubbing from the Yu Ji Tu is currently on display at the Walters Museum’s Maps exhibition until June 8th, 2008. For those reading on the East Coast, I highly recommend taking the train to Baltimore and checking out the exhibit. The Walters Museum is only a 10 minute walk straight down Charles street from the station. Washington, DC residents can take the MARC train for $14 roundtrip on a weekday. Residents in Boston, New York, and Philadelphia can take the Amtrak for about less than the price of filling up your gas tank.

I attended the opening night of exhibition and was very very pleased with how the exhibit is laid out and the maps that are on display. I learned quite a lot of new information about some important maps and because of this, I was able to spot the Yu Ji Tu in Rev. Claude L. Pickens 72-year-old photographs . I hope to go back to the Walters Museum again and look through it exhibition with some friends.

*PLUG* If you do go, don’t forget to check out the public iMac computers in the cafeteria. I made a few antique map overlays that feature popular maps from the exhibition. By adjusting the transparencies in Google Earth, you can watch time fly before your eyes. 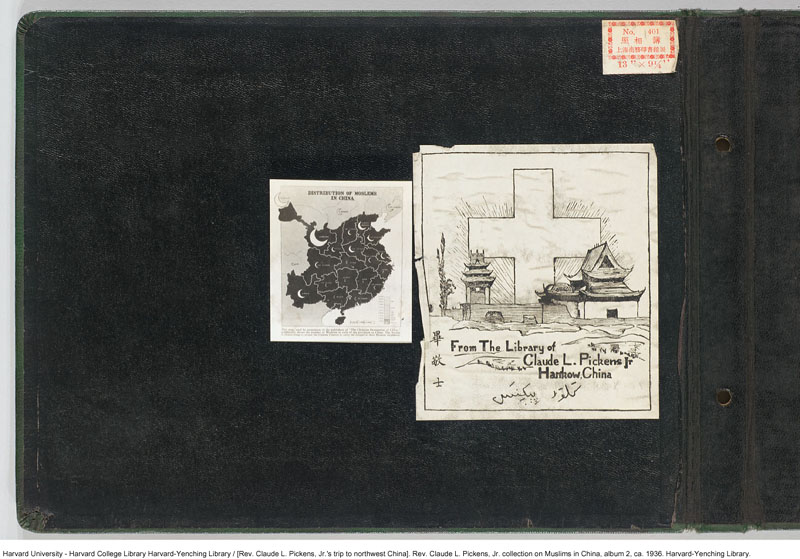 After doing some searching I was able to find a decent copy of the map that Rev. Claude L. Pickens, Jr. put inside of his photo album. It’s placement says a lot about the nature of the photo album and his travels. Through the 80+ pages of the scrapbook, many of the photographs he takes are of Anglo missionaries scattered throughout the western part of the country. Islam in China has a long history and a rich heritage dating back to as early as 650, when the uncle of the Islamic prophet Muhammad, Sa`ad ibn Abi Waqqas, was sent as an official envoy to Emperor Gaozong. It is said that Gaozong respected the teachings of Islam greatly, feeling the teachings were compatible with Confucianism, and offered the building of the mosque as a sign of admiration. From then on Islam spread throughout the country, but was most prevalent in the west of the country, where according to this map an estimated 3,000,000 Moslems lived in the Gansu province in 1922. Today there is no known total of Muslims living in China, but some estimates place the total around 20 million. 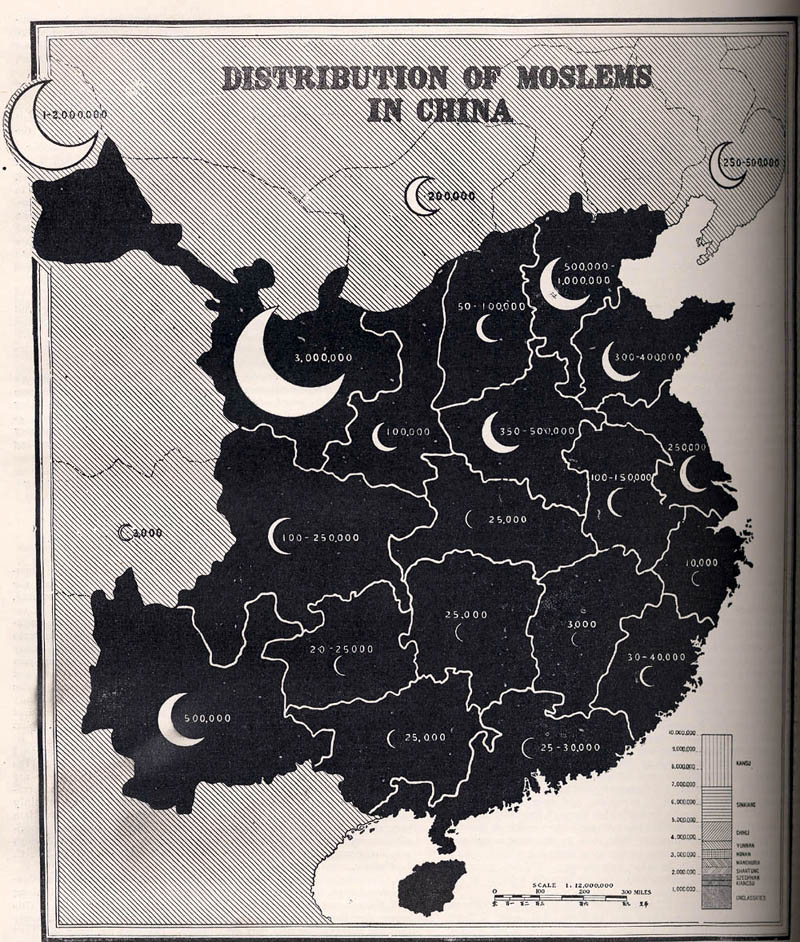 DISTRIBUTION OF MOSLEMS IN CHINA.
FROM: The Christian Occupation of China: a General Survey of the Numerical Strength and geographical distribution of the Christian Forces in China Made by the Special Committee on Survey and Occupation China Continuations Committee, 1918-1921.
Edited by Milton T. Stauffer. Shanghai: China Continuation Committee, 1922, p. 354.
Courtesy of the University of Oregon Library

I am going to send this map to someone who writes about strange maps.