The other day I posted the Analemma featured on Bowles 1780 Map of the World. Today I am posting another ancillary chart from the map that I thought was interesting. It is called the Vicissitude of the Seasons and it explains the nature of the seasons in a given year. Vicissitude means “a state of being changeable or in flux; the rise and decline of a phenomenon,” and the transcribed chart below is the explains how the Earth slowly goes from Summer to Spring. I’ve been thinking a lot about the seasons lately and I have been working on a new map to address their change over time. 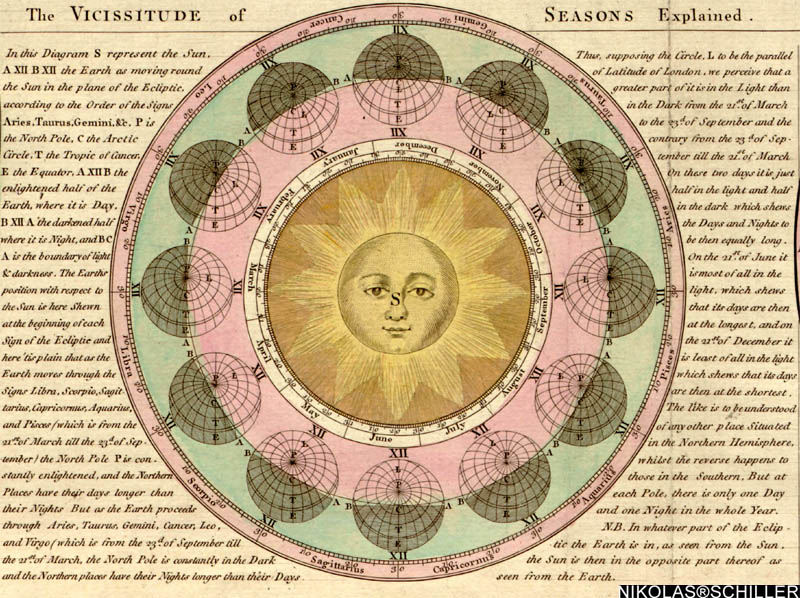 In this Diagram S represent the Sun, A XII BXII the Earth as moving round the Sun in the plane of the Ecliptic, according to the Order of the Signs Aries, Taurus, Gemini, etc. P is the North Pole, C the Arctic Circle, T the Tropic of Cancer, E the Equator, AXIIB the enlightened half of the Earth, where it is Day. BXIIA the darkened half where it is Night and BCA is the boundary of light & darkness. The Earth’s position with respect to the Sun is here shewn at the beginning of Ecliptic and here tis plain that the Earth moves through the Signs Libra, Scorpio, Sagittarius, Capricornus, Aquarius, and Pisces (which is from the 21st of March till the 23 of September) the North Pole P is constantly enlightened, and the Northern Places have their days longer than their Nights. But as the Earth proceeds through Aries, Taurus, Gemini, Cancer, Leo, and Virgo (which is from the 23rd of September till the 21st of March, the North Pole is constantly in the Dark and the Northern places have their Nights longer their Days.

Thus, supposing the Circle, L to be parallel of Latitude of London, we perceive that a greater part of it is in the Light than in the Dark from the 21st of March to the 23rd of September and the contrary from the 23rd of September till the 21st of March. On these two days it is just half in the light and half in the dark which shews the Days and Nights to be equally long. On the 21st of June it is most of all in the light, which shews that its days are then at the longest and on the 21st of December it is least of all in the light which shews its days are then at the shortest. The like to be understood of any other place situated in the Northern Hemisphere whilst the reverse happens to those in the Southern. But at each Pole there is only one Day and one Night in the whole Year. N.B. In whatever part of the Ecliptic the Earth is in, as seen from the Sun, the Sun is then the opposite part thereof as seen from the Earth.