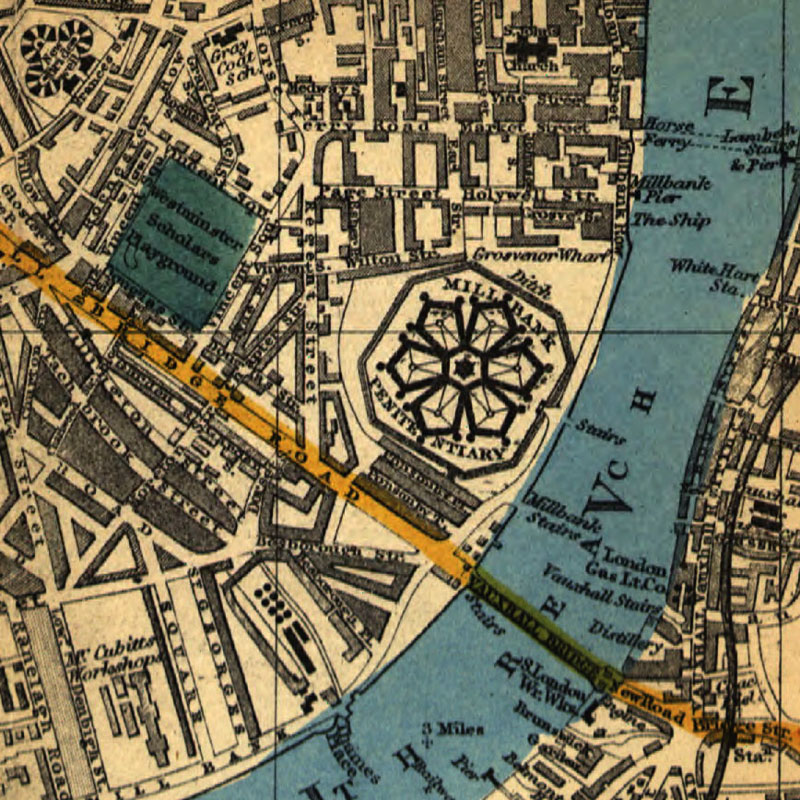 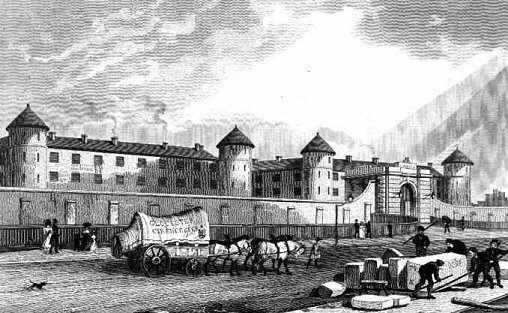 (The prison) was revived in 1794 when Jeremy Bentham was given Â£2,000 to make preparations and in 1799 he came up with his panopticon scheme intended to house 1,000 prisoners, which he proposed to erect in return for the sum of Â£19,000. This was dropped, but the penitentiary project finally got under way in 1812 when a location at Millbank was chosen. Swampy ground made building difficult, but the position had the advantage of being close to London and yet not having neighbours objecting to the presence of a huge prison in the vicinity. The original estimate assumed a capacity of 300 males and 200 females costing Â£259,700, but by the time its first part opened in 1816 the outlay had escalated to a massive Â£458,000 (â€œIt may be doubted whether the Taj at Agra, The Cloth Hall at Ypres or the Cathedral at Chartres had cost anything like this sumâ€).

…continuing…
A highly complex building of six pentagons radiating from a central circular chapel, the first part to be completed was inspected by members of the management committee on 23 June 1816; on 26 June the first prisoners arrived. These were females, of whom there were large numbers in the county gaols awaiting transportation.26 They â€œwere carried in caravans, chained together, from Newgate to Blackfriars bridge, there put on board a barge prepared to receive them, and conveyed under a strong guard of police officers by water to Millbankâ€

In the Handbook of London in 1850, it was described as:

MILLBANK PRISON. A mass of brickwork equal to a fortress, on the left bank of the Thames, close to Vauxhall Bridge; erected on ground bought in 1799 of the Marquis of Salisbury, and established pursuant to 52 Geo. III., c.44, passed Aug 20th, 1812. It was designed by Jeremy Bentham, to whom the fee-simple of the ground was conveyed, and is said to have cost the enormous sum of half a million sterling. The external walls form an irregular octagon, and enclose upwards of sixteen acres of land. Its ground-plan resembles a wheel, the governor’s house occupying a circle in the centre, from which radiate six piles of building, terminating externally in towers. The ground on which it stands is raised but little above the river, and was at one time considered unhealthy. It was first named “The Penitentiary,” or “Penitentiary House for London and Middlesex,” and was called “The Millbank Prison” pursuant to 6 & 7 of Victoria, c.26. It is the largest prison in London. Every male and female convict sentenced to transportation in Great Britain is sent to Millbank previous to the sentence being executed. Here they remain about three months under the close inspection of the three inspectors of the prison, at the end of which time the inspectors report to the Home Secretary, and recommend the place of transportation. The number of persons in Great Britain and Ireland condemned to transportation every year amounts to about 4000. So far the accommodation of the prison permits, the separate system is adopted. Admission to inspect – order from the Secretary for the Home Department, or the Inspector of Prisons. 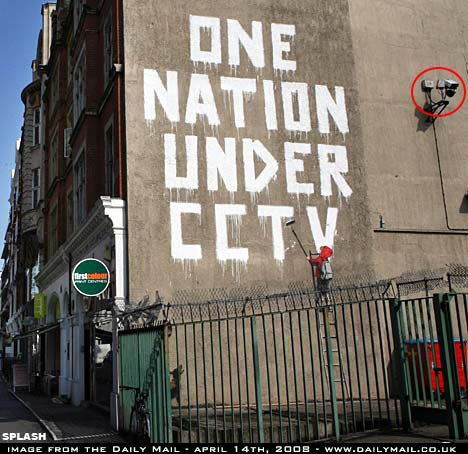 The Millbank Penitentiary was closed in 1886 and demolished in 1890. Seven years later in 1897 one of Britain’s leading art galleries, the Tate Britain, was constructed on the site of the penitentiary. Today the site also has the Chelsea College of Art & Design and a Peabody Trust housing estate.

From prisoners to paintings, this type of architectural archeology is a clear example of how cities change over time. Similar to Federal Triangle and even my own neighborhood, these changes are gradual, but still quite fascinating and worthy of further study.

I also find it interesting that the Panopticon concept continues today in London with their Orwellian network of CCTV cameras that capture all the movements of the urban populace. The prison is now in the streets. Sad.

View the Google Map of the Tate Britain in London, England.