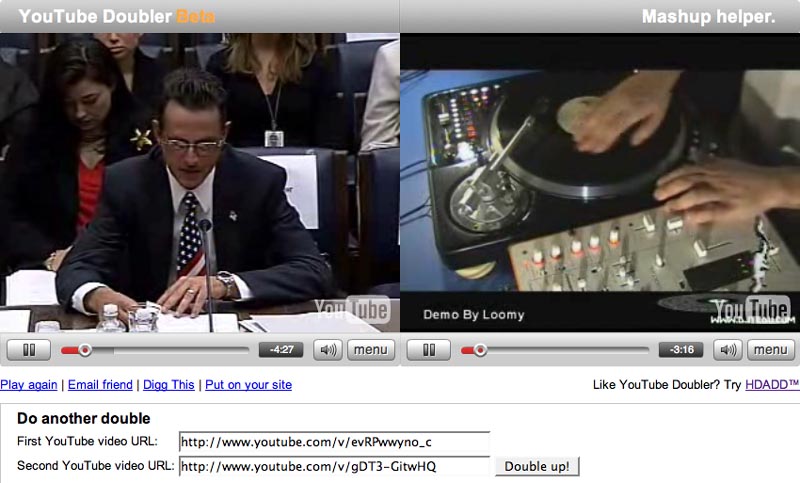 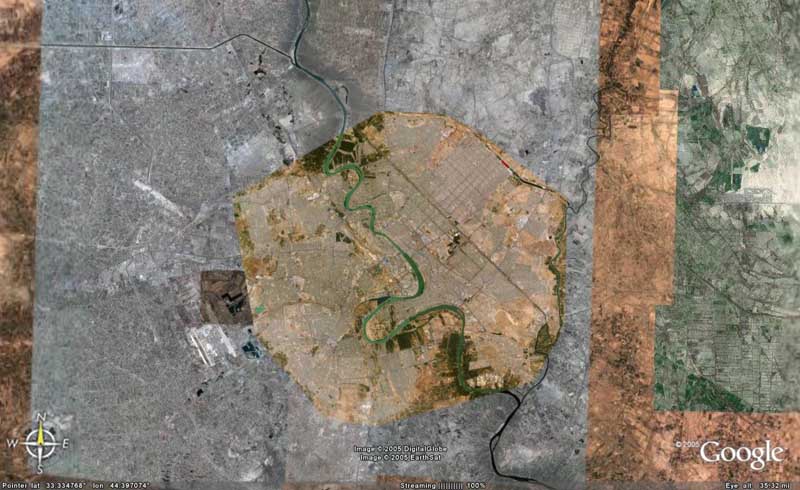 Last night I had a very interesting dream. Early on in my slumber I witnessed an Air France plane crash. I was in the backseat of some non-descript car and I looked up and saw the plane flying overhead. It looked like it was about to land, but it stalled and began to spin and then crashed about 500 ft from me. We stopped the car and I got out to survey the damage. Then the context of the dream completely changed to something different. Last time I had a dream similar to this, some bad things happened. I hope it was just a vivid dream and nothing else. 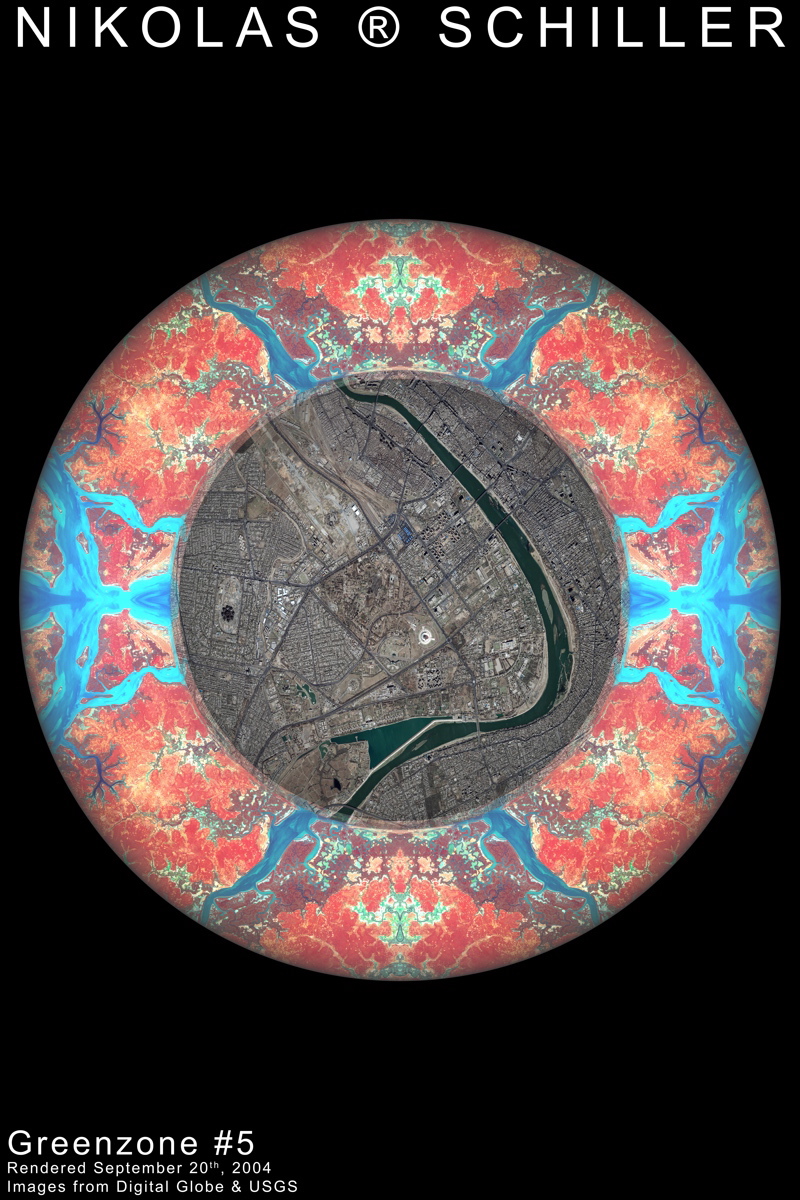 Its official. This blog has changed its name to a more fitting name. [drum roll]

Since the subject of Daily Renderings is now in the spotlight, I must comment on the rendering above. I really do love the satellite image being used for the torus, but I still don’t like the inner satellite image of Baghdad much. As I mentioned earlier, the original satellite image of the Green Zone in Baghdad was too large for computer to handle (it might have been due to the fact that half of my CPU speed was tied up rendering another graphic) so I had to scale down the image to roughly half its size. This meant that the 1 meter satellite image (meaning that each pixel represented one meter on the ground) was reduced to a 4 meter image (if you half the size of the image you don’t get 2 meters but 4 because the former pixel is square, not rectangular), and with the reduction in size, the new satellite image has half the amount of detail as before. Thus I’d rather have the inner satellite image have more detail. Plus it makes the spherical projection (aka the “lenz”) look more round- which, afterall, is the reason why I began this series in the first place. I am going to snag another image from one of the “Earth As Art” galleries and use the same Guinea-Bissau satellite image for torus. Expect another image in about 8-10 hours!

In other news, if you have a moment download the latest issue of the INDYPENDENT. It is chalk full of what will be going down in NYC next week during the RNC. I wish I could go, but money is tight and I feel I can be more of service here for some reason. I am helping load a puppet for Adam this morning, so at least I am helping out in some way.

This rendering is pretty good. There isn’t too much to say about it, except that I need make a digital installation with all of these renderings. I think I am going to make a page with all the thumbnails arranged in some mildly artistic way. It will look good, but in the meantime I need to fnd some stable income! Bills are due and the money isn’t adding up the way I want it to! Eeek! I added a “donate” button at the bottom of the right panel, but I sincerely doubt anyone will throw me any loot. I mean I’ve never donated to anyone before, but maybe I should start. In the meantime I am going to be submitting my resume to a bunch of different temp agencies and calling my family to ask for money (a first!). If I would have done this earlier this month and not spent so much money last weekend with my guest I don’t think this would have happened, but that is hindsight and its always 20/20. Yet if anyone has anything they need done for them and are willing to pay me, drop me a line!

The next rendering will use the same inner satellite image as the first Guinea-Biassau rendering, but with the torus being one that I’ll create. Expect something special in about 9 hours….

I think this rendering is just okay- it could be better. I chose to make the “lenz” aka the central sphere less round and it made the central image look very flat, which is not what I wanted it to look like. However, I do like the way the torus turned out as well as the green halo that surround the torus- call it a Green Halo for the Green Zone!

Last night while adding the new links section “Eye in the Sky” (which are links to satellite imagery outlets), I found what looks like a treasure trove of images from the U.S. Geological Survey. Aside from tons of images that have to be purchased, they have two galleries of composite satellite images which can be downloaded. It is called the “Earth As Art Collection” (Gallery 1, Gallery 2) and the images are all roughly 200 megabytes each, and due to their generous sizes, I’ll be able to make massive renderings using them. Best yet, they are completely free to use. Unlike the images I have used from Space Imaging & Digital Globe, which might be subject copyrights, the USGS images seem to be free to use. I also think its funny that they call the gallery “Earth As Art,” because I am using them for just that, with some slight, but significant variations.

Right now I am rendering a 4-panelled reflection of Guinea-Bissau with the torus texture being the same image but with the colors inverted. It should look very interesting!

I made two new renderings using a 4-panel reflection satellite image of downtown Baghdad as the center and a 4-panel reflection satellite image of Monrovia, Liberia. I think they are absolutely beautiful! Most definitely my favorite renderings yet. I really am pleased with how the double use of inner and outer satellite images looks. I think I’ll make a couple more with Baghdad as the centeral image and just change the size & texture of the torus. So far this summer I’ve made about 30 of these images, and if I were to professionally have these printed I could definitely have an interesting exhibit- I’ll continue dreaming in the meantime!

I am starting to redesign Citizen Policies Institute’s website and I am excited about making this website look amazing! I’ll begin working on this shortly. In the meantime, I have a very special guest in town who I haven’t seen in a year! So I’m not sure how much work I’ll be able to do on my blog or my next website redesign. However, do to the passive nature of rendering graphics, I’ll probably churn out a few more in the meantime.